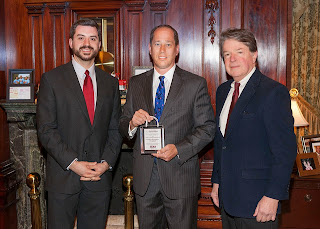 Senator Joe Scarnati (R-25) has been awarded a “Friend of the Food Industry Award” for 2014 by the Pennsylvania Food Merchants Association.

The Pennsylvania Food Merchants Association (PFMA) represents the employers of more than 100,000 individuals across PA. The award recognizes lawmakers whose voting records reflect the importance of fostering a healthy business climate in Pennsylvania to create jobs and spur economic development.

Senator Scarnati was one of only 10 members of the Senate to receive the award.

“These lawmakers have listened to PFMA members’ concerns during the past year and supported legislation that would have a positive impact on their businesses,” said David McCorkle, PFMA president and CEO. “They realize the importance of keeping a strong business climate in the Commonwealth for job growth and economic prosperity.”

The news leader of the Twin Tiers ... since 1947
Joe Scarnati