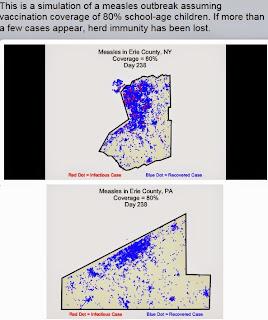 To bring facts and clarity to the public debate about immunization in light of the recent measles outbreak, the University of Pittsburgh Graduate School of Public Health today unveiled a computer simulation that explores the impact of measles outbreaks in cities across the U.S. Users can see how an outbreak would play out if their city had high or low vaccination rates.

The simulation – which is easily accessible from mobile devices – is an adaptation of the popular Framework for Reconstructing Epidemiological Dynamics (FRED), a free resource created at Pitt. By visiting fred.publichealth.pitt.edu/measles measles, people can select cities they’re interested in and watch short animations that play out an outbreak with either high or low vaccination coverage.

“FRED users can see on a map of any major metropolitan area in the U.S. how one case of measles can turn into a major outbreak or be quickly quashed, all depending on the vaccination rates of a community,” said Donald S. Burke, M.D., Pitt Public Health dean and UPMC-Jonas Salk Chair of Global Health. “Our hope is that people will use this to have informed discussions about the value of vaccination and its role in preventing epidemics.”

Examining the impact of high and low vaccination rates allows people to grasp the concept of herd immunity, explained Dr. Burke. The Centers for Disease Control and Prevention (CDC) estimates that when 95 percent of a community – or the “herd” – is vaccinated against measles, the 5 percent who can’t be vaccinated because they are too young or have compromised immune systems, as well as those whose immunity wore off or never took hold, should be protected because the virus can’t gain a foothold and spread. When vaccination rates dip too low, the herd isn’t protected and measles can sweep through a community.

Measles is a highly contagious virus. If someone with measles is in a room, nine out of 10 unvaccinated people in that room will contract the virus. For two hours after the infected person leaves, the room’s air will harbor the virus.

The news leader of the Twin Tiers ... since 1947
measles University of Pittsburgh