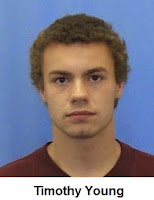 An Elk County man is one of two people charged in connection to a fire that did half a million dollars to a DuBois warehouse and also damaged a city fire truck.

20-year-old Zachary Coombs of Punxsutawney and 19-year-old Timothy Young of Kersey are accused of breaking into Gibby’s Warehouse in the early morning hours of January 5, vandalizing motorcycles with spray paint, and stealing several items.

Coombs then allegedly set a fire inside the building. Outside, he and Young both allegedly vandalized the outside of the building, a car and three other buildings.