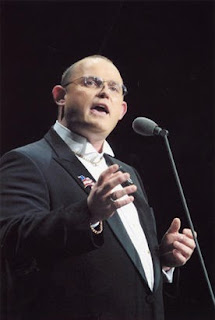 Just in time to get everyone ready for St. Patrick’s Day, Tynan will perform March 4 in the Bromeley Family Theater at Pitt-Bradford. He will be accompanied by Bill Lewis.

The New York Times has called him “the closest thing this country has to an official Meistersinger.”

Tynan has performed at historic events including Ronald Reagan’s funeral and the Inaugural Prayer Service at the National Cathedral. His memorable renditions of “God Bless America” have been heard at the World Series, The Belmont Stakes, and other momentous events. Profiled by ABC’s 20/20, People Magazine and CBS Sunday Morning, Tynan was born with a lower limb disability and had his legs amputated at age 20. Within a year, he was competing in the Paralympic Games, both in track and field and as an equestrian. He won 18 gold medals and set 14 world records, nine of which are still in place today.

In 1992 less than one year after he began studying music, Tynan won the John McCormack Cup for Tenor Voice. He shot to stardom two years later after winning the BBC talent show, Go For It. A recording contract with Sony Music and sold-out concerts around the world soon followed. His debut album, My Life Belongs to You, released in 1998, jumped to number five on the charts. That same year, Tynan joined Anthony Kearns and John McDermott as The Irish Tenors, an instant worldwide sensation.

Tynan’s album Ronan debuted at #2 on Billboard’s Classical Crossover Chart. He put out Sing Me an Irish Song, a collection of Irish favorites in 2009 and his latest album, All Kinds Of Everything, features classic performances from his musical career. Tynan captivates audiences with his humor, lively spirit and inspirational message about overcoming obstacles and living life to the fullest. Tickets are priced at $40 each and will be available for season subscribers in July, and for the general public August 3rd. Additional information will be forthcoming at the BCPAC office 814-362-2522, or online at www.BCPAC.com.