April 08, 2015
Bradford Regional Medical Center (BRMC), a member of Upper Allegheny Health System (UAHS), posted a surplus of $2,078,035 in 2014. The announcement was part of Wednesday’s presentation at the Bradford Club by Timothy J. Finan, President and CEO of BRMC and Upper Allegheny Health System, before an audience of more than 100 community members at the hospital’s Annual Meeting. 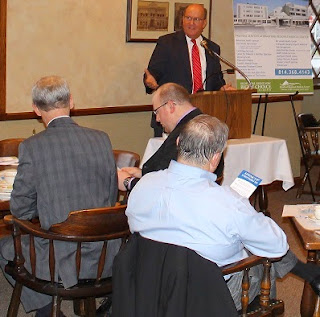 Finan reported the surplus on hospital revenues of $70,826,456 in 2014. It was the fourth consecutive year BRMC has posted an operating surplus. Finan said the four years of surpluses came after several consecutive years of losses by the hospital prior to the formation of Upper Allegheny Health System. “The formation of Upper Allegheny Health System has provided $4 million of financial benefit annually to our member hospitals,” Finan said in a news release provided to WESB. “Had it not been for the formation of UAHS, our hospitals would no doubt be in a difficult place today.”

While pleased with the results, Finan also emphasized the challenging and “hostile environment” faced by rural hospitals. He noted that many hospitals will find it difficult to survive in the years ahead. “Not long ago there were 7,000 hospitals in the U.S. Currently there are fewer than 4,700. Not far down the road we may see fewer than 3,500,” Finan said.

“If a large city hospital closes, it’s a sad day but typically there are others down the street. That’s not the case with rural hospitals, “Finan said. “Rural hospitals are critical to the well-being of the communities, which are both sole providers and economic anchors for their respective communities.” That’s why we are working so hard to ensure that our community hospital not only survives but flourishes.”

He said the rate of inflation is no longer keeping up with reimbursement for hospitals. “The payment rates we are seeing from health plans, including Medicare, average, in the aggregate, only about 1.5% per year,” Finan said. “The annual rate of inflation is running at 3.0%. This has been occurring year after year and is largely responsible for the difficulties many hospitals find themselves in.”

“He said one major initiative in 2014 was the creation of the UAHS Clinical Integration Organization. “It’s essential that hospitals, physicians and other medical providers work in unison to better manage patient care, and share both financial risk and reward,” Finan said. “We believe the establishment of our Clinical Integration Organization provides the building blocks for success in the future.”

“For hospitals to succeed they will need to not only provide quality care and lower costs, but become successful in keeping people out of hospitals. We need hospitals, physicians and health plans working together to achieve that goal.”

During his presentation Finan said he was extremely proud of the quality improvement efforts at BRMC in 2014. “Quality care is our number one priority,” he said.

“We introduced Computerized Physician Order Entry to our physicians, which allows direct input of physician orders into the patient chart, avoiding potential errors previously incurred due to medical transcription of hand written orders,” he said. “Clinical data suggests that CPOE can reduce interpretation errors by more than 80 percent.

“In 2014 Bradford Regional Medical Center earned the “Safety Across the Board” Excellence Award from The Hospital and Healthsystem Association of Pennsylvania Hospital Engagement Network (PA-HEN). To earn the Safety Across the Board Award, BRMC had to meet or exceed target goals on at least two-thirds of 11 adverse event areas,” Finan said.

“We also introduced the Patient Speak Up campaign, where we encourage patients to bring their quality and care concerns to the attention of staff. To put more emphasis on quality we also introduced Safety Champions to our quality program. These are 45 BRMC employees who volunteered to become safety advocates at the hospital.

Finan said the hospital saw renovations and improvement to The Pavilion in 2014. “There were significant renovations to resident lounges, rehab space and public spaces,” he said. It comes following the 2013 opening of a new garden and patio area for residents at the Pavilion.”

He also said he was extremely proud of the hospital’s community service efforts, particularly its Community Connections program, where hospital managers volunteered to offer a sun safety program, asthma management camp for children and furnishing of school back packs for 200 children at three schools.