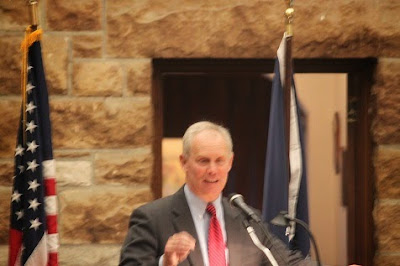 Speaker of the State House Mike Turzai this afternoon participated in a roundtable discussion on DEP's proposed regulations for conventional oil and gas drillers. It was held in the Wick Chapel at Pitt-Bradford. In the evening, he was the keynote speaker for the McKean County GOP spring dinner.

The roundtable discussion focused in large part on new drilling regulations being proposed by the Department of Environmental Protection (DEP) and how those regulations could devastate the industry. The lawmakers heard from representatives of Pennsylvania Independent Petroleum Producers (PIPP), Pennsylvania Independent Oil and Gas Association (PIOGA), Penn Grade Crude Coalition (PGCC) and American Refining Group (ARG). 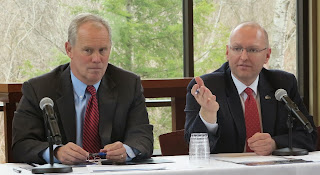 “I invited the speaker to come here because it was important that he hear from the conventional oil and gas producers who are on the front lines fighting to keep their businesses afloat – and their workers employed – in the face of overregulation by DEP,” Causer said. “This is an industry that has existed in Pennsylvania for well over 100 years. It is vital to our local and state economies, and we cannot afford to let it be regulated out of business.”

“You all have been nothing but good stewards of the environment over the years, and now we have more opportunities to develop oil and gas to create more jobs, work toward energy independence and boost manufacturing,” Turzai said. “But we’ve been on defense. We’ve been so apologetic about the development of oil and natural gas. It’s time to go on offense.”

Back in 2012, the General Assembly passed Act 13, which enacted an impact fee on natural gas drilling in the Marcellus Shale. As a result of that act, DEP also began to draft new regulations to address the development of unconventional wells. However, when the first draft of the regulations came out last year, they were drawn to apply to conventional wells also.

“There are vast differences between conventional and unconventional drilling,” Causer said. “Those differences certainly warrant separate regulations, and in fact, we passed legislation to require them. Our intent was for DEP to take a step back and start fresh on the regulations for conventional wells; instead, they simply changed the name and kept moving them forward.”

Turzai agreed. “We thought the law to separate the regulations would end this fight, but clearly we have to keep fighting and use all of the tools available to do that,” he said. “Regulations are necessary and expected, but they need to be reasonable, relevant and realistic for the industry.”

A new draft of the regulations was recently released and is now open to public comment through May 19. DEP also announced it will hold three public hearings on the proposal, including two in the Northern Tier. The exact dates and locations have not yet been announced.

Industry leaders and lawmakers remain deeply concerned about the regulations.

“Upon receiving and reviewing the final draft of the Chapter 78 regulations, it is apparent that the DEP’s goal is to regulate the conventional oil/gas industry out of existence,” said Mark Cline, president of PIPP. “These final regulations were drafted by DEP officials (with no field experience) in Harrisburg. The DEP, in writing other regulations in the past, has always consulted the field inspectors, who understand our industry and how it works to make comments on proposed regulations. This time the oil and gas inspectors have told us they were not consulted. Also the comments and testimony from the oil and gas industry were ignored.”

Recognizing the problem, legislation has been introduced in the House and Senate to create a Penn Grade Crude Development Advisory Council to help ensure people with firsthand knowledge of the industry are more involved in the regulatory process. Under House Bill 600, the council would be charged with studying existing regulations to assist with changes to better address the differences between conventional and unconventional oil and gas production. It also would serve as a public-private partnership charged with promoting Pennsylvania’s historic conventional oil and gas industry and advocating its future development.

“It’s clear that the regulations needed to oversee deep drilling in the Marcellus Shale region simply shouldn’t apply to the very different process of shallow well drilling,” Turzai said. “We need to go over these regulations line by line and identify the problem areas with the regulations themselves and with the process by which they were drafted. We need to be prepared to make our case.”