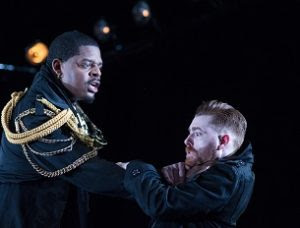 The St. Bonaventure University Department of Visual and Performing Arts will host the National Players production of Shakespeare’s “Othello” on Monday, Oct. 30, at 7:30 p.m. in the Regina A. Quick Center for the Arts.

The production is part of the department’s Martine Performing Arts Series, designed to bring a broader variety of music, theater and dance to the university community and selected by the faculty-artists of SBU’s music and theater programs.

“Othello” is the story of a celebrated black general returning home from war and the hatred he encounters because of his race. His most trusted aide, Iago, devises a plot to ruin him. Soon, Othello and his loving wife, Desdemona, are caught in a terrifying trap of lies and murder.

In the National Players’ production, directed by the company’s artistic director Jason King Jones, “Othello” is given a contemporary design. Shakespeare’s brilliant words combine with the resonance of identity and racial tension to transform “Othello” into a powerful production for today’s America.

The National Players, the nation’s longest-running touring theater company, marks its 69th touring season in 2017. Part of the Olney Theatre Center of Maryland, an Equity theater just north of Washington, D.C., the company rehearses for three months and then takes multiple productions on the road from September through May of each year. The company’s actors and technicians come from all over the nation. The National Players have performed for more than 3 million audience members in 43 states, including performances at the White House, Europe, Asia, and even at the Arctic Circle.

“The National Players are one of the premier touring companies in the U.S.,” says SBU theater program director Ed. Simone. “I’ve seen their work and have had colleagues who performed with them. They are polished, professional and bring tremendous energy to their work. This is a rare opportunity for the SBU community and our region to see Shakespeare done by such an amazing company.”

The cast of “Othello” will give a workshop for SBU Theater students the morning after the performance.

The National Players’ production of “Othello” by William Shakespeare performs one night only. There will be an audience talkback after the performance. The performance is free for SBU students, faculty and staff. For all others, tickets are $5. For ticket information, call the Quick Center box office at (716) 375-2494.

The Martine Performing Arts Series, presented by St. Bonaventure’s Department of Visual and Performing Arts, is funded by a grant from the university’s James J. Martine Faculty Development Endowment.

Performances will continue through the 2017-18 academic year. Next up is a performance by the Les Sabina Jazz Septet, featuring tenor saxophone player Dr. Leslie Sabina, chair of the Department of Visual and Performing Arts. The performance is set for 7 p.m. Thursday, Nov. 9, at the university Rathskeller.