April 24, 2018
Harmonia Chamber Singers, a Western New York a cappella group known for its innovative programming and stunning performances, will present “An Evening of a Cappella” at 7 p.m. Monday, April 30, at St. Bonaventure University’s Regina A. Quick Center for the Arts. 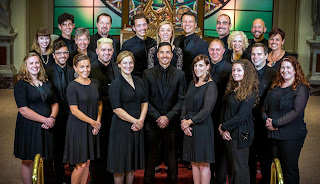 It is the final concert in the Martine Performing Arts Series, a yearlong program presented by the Department of Visual and Performing Arts in the university’s School of Arts and Sciences.

Founded in 2006 by Artistic Director Robert Pacillo, Harmonia Chamber Singers is a 21-member group that began as an experimental ensemble and quickly developed into one of the most sought-after a cappella groups in the region. Its performances span centuries of choral music, from Medieval chant to the present, and each concert is meant to be an emotional, exciting, educational and inspirational experience for the singers and their audience.

“Their music is finely tuned and strikes a nice balance among choral works from the 1800s to the present day. Their repertoire is very accessible and should appeal to anyone on campus,” said Dr. Les Sabina, director of Visual and Performing Arts at St. Bonaventure.

“We certainly wanted to make sure that talented voices were represented in our Martine series. After all, St. Bonaventure has some great student singers in our Chamber Singers and Concert Choir,” said Sabina. “We’re very pleased to be bringing Harmonia to campus.”

Harmonia Chamber Singers has performed at some of the most beautiful acoustic spaces in Western New York, as well as at Carnegie Hall in New York. The group was named by Artvoice as the Best Vocal Ensemble in 2011.

Artistic Director Pacillo is an active singer, conductor, teacher and accompanist. He earned a bachelor’s degree in music education and piano performance, and a master’s in music education, both from the University at Buffalo. He is choral director at Lockport High School and a cantor for the Diocese of Buffalo, and has sung with St. Joseph Cathedral Choir, the Buffalo Choral Arts Society, Vocalis Chamber Choir and The Lake Effect.

The Martine Performing Arts Series is funded by a grant from the James J. Martine Faculty Development Endowment. Named after a longtime former English professor, the endowment funds activities designed to improve the quality of teaching and learning within the core curriculum at St. Bonaventure.

The series expands the arts curriculum beyond the classroom walls, said Sabina, offering students a convenient, no-cost way to experience a variety of performing arts genres. Faculty in the Department of Visual and Performing Arts select the artists, choosing performances that complement the arts curriculum at the university.

All performances in the series are free for St. Bonaventure University students, faculty and staff. The series is open to the public as well, although general-public tickets are limited and there is a nominal per-person fee of $5 for each event held at the Quick Center. For general-public tickets for this performance, call the Quick Center Box Office at 716-375-2494.