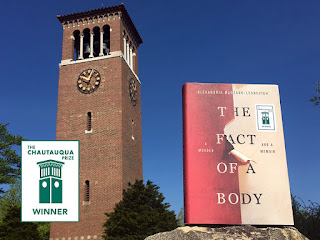 Chautauqua Institution is delighted to announce The Fact of a Body: A Murder and a Memoir (Flatiron Books), by Alexandria Marzano-Lesnevich, as the 2018 winner of The Chautauqua Prize.


As author of the winning book, Marzano-Lesnevich receives $7,500 and all travel and expenses for a summer residency at Chautauqua from Aug. 1 to 6, 2018. A public reading will take place at 3:30 p.m. Friday, Aug. 3, in the Hall of Philosophy on the Institution’s grounds.


Marzano-Lesnevich said she was honored to receive The Chautauqua Prize, and “that the award comes from an institution with such a long history of creating space for rigorous, rewarding interdisciplinary and cross-genre dialogue makes it particularly meaningful at this moment in our national history, with our urgent need for socially engaged art.”


“I very much look forward to attending the Institution this summer, and to all the rich conversations that will unfold there,” Marzano-Lesnevich said.


“Alexandria’s is a difficult and necessary book, and we are thrilled to shine a national spotlight on The Fact of a Body by presenting it with this esteemed literary honor, The Chautauqua Prize,” Hill said. “By bringing this book into the center of a conversation, we can learn valuable lessons from one another about healing, empathy, and bearing witness.”


David A. Griffith, vice president and Emily and Richard Smucker Chair for Education at Chautauqua Institution, called The Fact of a Body “one of the most moving and innovative works of literature — let alone memoir — that I’ve read in years.”


“It rivals Truman Capote’s In Cold Blood in its eloquence and epic sweep, and is reminiscent of Sister Helen Prejean’s Dead Man Walking in its humanization of those who most would say do not deserve it, as well as its call for readers to reconsider the justness of the death penalty,” Griffith said. “In the end, though, comparisons to other works of literature fall short because of Marzano-Lesnevich’s singular willingness to examine her own conscience, and the ways that her own traumas shape her.”


Part reportage and part memoir, The Fact of a Body: A Murder and a Memoir follows a young law student through her early career as she digs into both her own past, and the past of a convicted murderer. In a book 10 years in the making, Marzano-Lesnevich shows how the law is more personal than we would like to believe, creating a “gripping” story of “great importance.” Readers called it “an extraordinary memoir” that is “brave and intimate.”


The Fact of a Body was named one of the best books of the year by Entertainment Weekly, Audible.com, Bustle, Book Riot, The Times of London, and The Guardian. An Indie Next Pick and a Junior Library Guild selection, it was long-listed for the Gordon Burn Prize and a finalist for a New England Book Award, a Goodreads Choice Award, and a Lambda Literary Award. It has been published in the United States, the U.K., and the Netherlands; translations are forthcoming in Turkey, Korea, Taiwan, Spain, Greece, Brazil, and France.


A 2014 National Endowment for the Arts fellow, Marzano-Lesnevich has received a Rona Jaffe Award and has twice been a fellow at both MacDowell and Yaddo. Her essays appear in The New York Times, Oxford American, and the anthologies True Crime and Waveform: Twenty-first Century Essays by Women, as well as many other publications. She received her J.D. from Harvard, her Master of Fine Arts at Emerson College, and her Bachelor of Arts from Columbia University. She now lives in Boston, where she teaches at Grub Street and in the graduate public policy program at Harvard’s Kennedy School of Government. This fall, she will join the English department at Bowdoin College as an assistant professor teaching creative non-fiction.


The Chautauqua Prize, this year awarded for the seventh time, is an annual prize that celebrates a book of fiction or literary/narrative nonfiction that provides a richly rewarding reading experience and honors the author for a significant contribution to the literary arts. Previous winners include The Sojourn, by Andrew Krivák (2012); Short Nights of the Shadow Catcher, by Timothy Egan (2013); My Foreign Cities, by Elizabeth Scarboro (2014); Redeployment, by Phil Klay (2015); Off the Radar, by Cyrus Copeland (2016); and The Fortunes, by Peter Ho Davies (2017).


Details on The Chautauqua Prize are available online at chq.org/prize. Books published in 2018 will be accepted as submissions for the 2019 Prize beginning in September 2018.


PRAISE FOR THE FACT OF A BODY

“A fascinating hybrid of true crime and memoir, The Fact of a Body is intricately constructed, emotionally raw, and unflinching. Alexandria Marzano-Lesnevich has written a gripping meditation on memory, justice, and the limits of empathy.” —Tom Perrotta


“The balancing act here performed between autobiography and journalism, documentary and imagination, witnessing and reckoning, the tender and the terrible, is shrewd and graceful. In the hands of a lesser human or writer, it could have all fallen apart; instead, Alexandria Marzano-Lesnevich has given us an exquisite and exquisitely difficult work of art that makes a fierce claim on our attention, conscience, and heart.”

—Maggie Nelson, author of the NBCC award-winning Argonauts
“This book is a marvel. With unflinching precision and immense compassion, Alexandria Marzano-Lesnevich peels apart both a murder case and her own experience to reveal how we try to make sense of the past. The Fact of a Body is equal parts gripping and haunting and will leave you questioning whether any one story can hold the full truth.”

—Celeste Ng, author of the New York Times bestselling Everything I Never Told You and Little Fires Everywhere
“The Fact of a Body is unlike any murder story I’ve ever read, a masterpiece of both reportage and memoir, a book that could only be written by an author with Alexandria Marzano-Lesnevich’s staggering gifts: a relentless reporter with a law degree from Harvard, a poet’s understanding of the cadence of a line, and a novelist’s gift for empathy. Walter Benjamin famously said that all great works of art either dissolve a genre or invent one. This book does both, and its greatness is undeniable.”

—Justin St. Germain, author of Son of a Gun
“The Fact of a Body is remarkable act of witness, an anatomy of silence and the violence it abets, a book of both public and private accountings. Rejecting the false comfort of certainty, it confronts the inadequacy of all our tools for fathoming not just unforgivable crimes, but the baffling, human grace that can forgive them. This is a profound and riveting book.”
—Garth Greenwell, author of What Belongs to You
Alexandria Marzano-Lesnevich Chautauqua Institution Chautauqua Prize