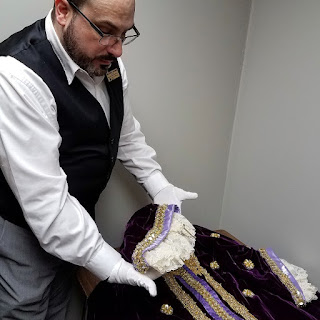 The Marilyn Horne Museum and Exhibit Center announced today that the museum will be closed for extended maintenance following a water pipe break in the museum’s theater on Tuesday.

Following the extreme dip in temperatures this week, a sprinkler line above the museum burst, causing minor and isolated water damage. Facilities staff from the University of Pittsburgh at Bradford were on the scene within minutes and were able to contain the leak quickly.

The museum is expected to reopen Feb. 4. The museum’s gift shop and café remain open during maintenance. Museum manager Matthew Hileman said the museum is taking advantage of the down time to complete annual maintenance and repairs, which include the addition of new material inside the museum.

“The museum’s second anniversary is quickly approaching, and I had some special exhibits planned.” Hileman said. “We also had our annual cosmetic touch-ups scheduled for next month. These recent developments allow us the opportunity to complete the work all at once.”

Among the scheduled maintenance is the rotation of the recital gown exhibit inside the museum. In spring of 2018, Marilyn Horne donated her collection of recital gowns, which have been worn on stages around the world. The wardrobe collection donated to Pitt-Bradford includes 11 unique gowns and four stage costumes, including costume jewels worn in various roles throughout Horne’s career.
The gowns were mostly created by famed costume designer Barbara Matera, who was known for her work for Broadway, Hollywood, and the opera world. Her film credits include “Indiana Jones and the Temple of Doom,” “The Great Gatsby,” “Death on the Nile,” “The Addams Family,” and Martin Scorsese’s “The Age of Innocence.”

“I am excited to begin showing more of Marilyn’s collection at the museum. The various objects and papers donated to the university speak to her international celebrity and the attention that her career brought to her hometown over the decades,” Hileman added. “Visitors should expect to see more exciting material on view in 2019.”

For more information about the museum, its exhibits, and programming, visit marilynhorne.org.

Pictured, Museum manager Matthew Hileman examines lacework on an original costume created for one of Marilyn Horne’s many performances as Isabella in Rossini’s “Italian Girl in Algiers”