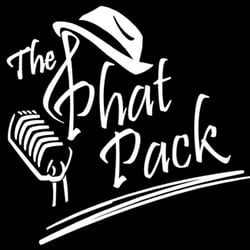 Feb. 22 at Pitt-Bradford's Bromeley Family Theater:
Four Broadway Performers join together to sing some of the best music of Broadway, while sharing their personal stories from their individual journeys —  in this intimate, funny & entertaining evening of music, laughter & dreams!  This extraordinary group of artists met while performing in “PHANTOM: The Las Vegas Spectacular”  and together formed their own highly-acclaimed spectacle that continues to thrill audiences everywhere:  THE PHAT PACK!
THE PHAT PACK opened in the fall of 2012 in Las Vegas to rave reviews, and standing ovations!   The show headlined for almost a year at The Plaza Hotel & Casino in downtown Las Vegas, followed by a highly successful run in the Windows Showroom at Bally’s Hotel And Casino, overlooking the world famous Las Vegas Strip!
THE PHAT PACK brings you Music, Laughter & Dreams –  These Broadway Performers (formerly with PHANTOM in Las Vegas) sing the great music of Broadway, American Standards, as well as fun, exciting original comedy material — AND share stories from their personal lives and careers!  THE PHAT PACK tips its hat to an era of elegance and entertainment in their own tribute to the Entertainment Capital of the World, Las Vegas!
https://youtu.be/Hsn3zdKrFsE
BCPAC Bromeley Family Theater pitt-bradford The Phat Pack