Les Sabina and the Septet to Jazz Up St. Bonaventure’s Rathskeller

February 19, 2019
Answer: The sound of contemporary jazz by some of the best jazz musicians in all of Western New York and the smell of spicy hot chicken wings wafting from the Rathskeller beneath Hickey Dining Hall.

Question: How do you know a new semester is underway at St. Bonaventure University? 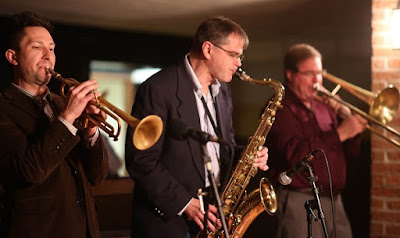 The start of the spring semester at St. Bonaventure means a new set of offerings in the annual Martine Performing Arts Series, which means another Jazz ’n’ Wings performance by Les Sabina and the Septet, a group comprising an all-star cast of jazz musicians.

Dr. Les Sabina, professor of music and chair of the university’s Department of Visual and Performing Arts at St. Bonaventure, will perform with his septet at 7 p.m. Thursday, Feb. 28, in the university Rathskeller. The performance is free and open to all, and free chicken wings will be served.

Sabina, an award-winning composer and saxophonist, will be joined on stage by some of the best jazz musicians in the region: Cody Anderson, a State University of New York at Fredonia graduate, on trumpet; trombonist Kenny Crane, music teacher at Portville Central School and a former member of the Maynard Ferguson and Buddy Rich orchestras; Tom Gestwicki, a SUNY Fredonia music instructor, on guitar; pianist Jan Rhody, chair of the music department at Olean High School; Tim Sullivan, professor emeritus at Nazareth College, on bass; and Moses Howden of Olean on drums.

“We’ll be performing contemporary pieces culled from the swing and bebop traditions,” said Sabina. “This is always a fun gig for us because the Rathskeller offers a club-like setting, similar to what you’d find at jazz joints in Chicago or New York. We look forward to this performance each semester, and I think the audience does, too.”

Additional information on these upcoming performances will be presented in individual news releases prior to each event.

The Martine Performing Arts Series, planned and executed by the Department of Visual and Performing Arts at St. Bonaventure, is dedicated to expanding the arts curriculum beyond the classroom walls and bringing many different types of musical genres to campus and the community.

The series is funded by a grant from the James J. Martine Faculty Development Endowment. Named after a longtime former English professor, the endowment funds activities designed to improve the quality of teaching and learning within the core curriculum at St. Bonaventure.
Buffalo Philharmonic Les Sabina Quick Center Rigas Family Theater St. Bonaventure