Auditions for 'Mourning Has Broken' 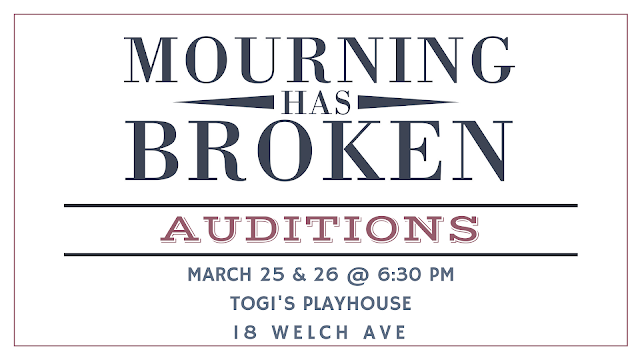 AUDITIONS!!
"Mourning Has Broken" by local writer/director Pab Sungenis
Show Dates: May 17, 18, & 19
AUDITION INFO:
Please arrive promptly at 630pm ether on March 25 or 26 at Togi's Playhouse, prepared to read from the script with others. You should dress comfortably.
If you have any questions, please feel free to message Bradford Little Theatre. Rehearsals will begin with a read-thru on March 31st and are tentatively scheduled for 3 days a week, including Sundays.
CHARACTER INFO:
BARRY (Male, Mid 30’s) – A lawyer. His philosophy is best summed up in the words of Walt Kelly: “Don’t take life too serious, it ain’t nohow permanent.” Barry is a joker, prankster, and full of love of life. How much of this is a façade for his true feelings is uncertain.
JEFF (Male, Mid 30’s) – A stockbroker. Financially comfortable if not well-to-do, but restless and slightly aimless. Keeps asking himself “is that all there is?” Is jarred by the deaths of Mark and Hank to do something drastic to find purpose in his life.
GABRIELLE (Female, late 20’s to mid 30’s) – British with a distinct accent only slightly tempered by years in the States. Married to Don. Relative latecomer to the circle of friends but accepted by the others as if she has been there since day one. Has just found out she is pregnant, which is leading to a major change in both her and Don’s life.
DON (Male, Mid 30’s) – Gabrielle’s husband. Creative type. Ill at ease in formal situations like funerals. Is afraid of change, which is a major problem considering what he and Gabby have in mind, and have kept a secret from the others.
TOMMY (Male, early 20’s to early 30’) – The younger brother of Hank, a member of the circle that the other friends have not seen in a while. Bipolar with other possibly undiagnosed conditions. Over the years he has become the honorary kid brother of everyone in the group. And he will need them because unbeknownst to most of the group, Hank is dying of cancer.
FRAN (Woman, mid 60’s or older) – A Professional Mourner.
MINISTER (Either, indeterminate age) – A disinterested eulogist.
SINGER/MUSICIAN (Either, any age) – A very poor singer and/or musician