March 20, 2019
The National Comedy Center in Jamestown will be preserving a piece of comedy history. 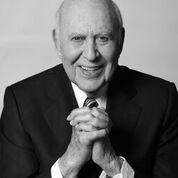 Legendary producer, director, writer and actor Carl Reiner today announced an initiative to digitally preserve his extensive personal collection of production-used scripts from "The Dick Van Dyke Show."
The scripts for all 158 episodes, which are heavily annotated in Reiner's own handwriting, have been stored away since the series ended in 1966 and have never before been made available to a cultural institution for conservation or exhibition.
The announcement came on Reiner's 97th birthday.