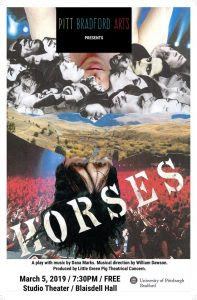 New York punk queen and poet Patti Smith collides with Sam Shepard in 1972 Greenwich Village. The result is a cyclone of creativity that marked the second half of the 20th century. From squaller to iconic status, their paths are tracked through song and story.
A special presentation in conjunction with Women’s History Month.
A play with music by Dana Marks. Musical Direction by William Dawson. Produced by Little Green Pig Theatrical Concern.