Sal Andolina and His Buffalo Philharmonic Colleagues at St. Bonaventure 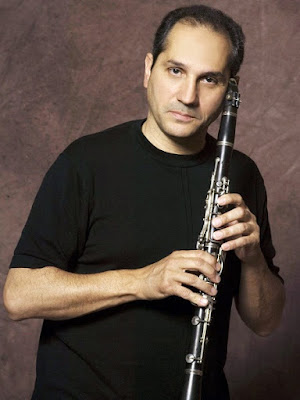 Buffalo Philharmonic Orchestra clarinetist and saxophonist Sal Andolina will be accompanied by six of his BPO colleagues when he returns to St. Bonaventure University Monday, March 25, for an evening performance as part of the university’s Martine Performing Arts Series.

The concert, “Sal Andolina’s Mixed Bag,” will be presented at 7 p.m. in Rigas Theater of the university’s Regina A. Quick Center for the Arts. Admission is free for St. Bonaventure students and employees. For others, a limited number of $5 general admission tickets are available and may be purchased by calling the Quick Center at (716) 375-2494.

“Our audiences have been treated to the virtuosity of Sal Andolina over the past couple of seasons, in concerts featuring jazz as well as French and Italian café music,” said Dr. Les Sabina, professor of music and chair of the university’s Department of Visual and Performing Arts, which plans and executes the annual Martine series. “Now, we will hear him in a classically influenced chamber music setting, where his clarinet will really shine.”

The concert will include works for string quartet, piano, flute and piano, and clarinet sextet, by composers as varied as Scott Joplin, Mozart, Aaron Copland and Dick Hyman.

“I asked Sal to bring along some of his favorite colleagues who enjoy presenting accessible music,” said Sabina. “Sal put this program together to present instruments in different settings, playing pieces from different genres and to showcase some great BPO musicians. This concert will feature a number of fairly short compositions, pieces that will immediately grab the listener’s attention and illustrate the variety of chamber music repertoire that is available.”

The Martine Performing Arts Series is dedicated to expanding the arts curriculum beyond the classroom walls and bringing many different types of musical genres to campus and the community. The series is funded by a grant from the James J. Martine Faculty Development Endowment. Named after a longtime former English professor, the endowment funds activities designed to improve the quality of teaching and learning within the core curriculum at St. Bonaventure.

Next up in the 2018-2019 Martine series is a presentation of “El Quijote” by the New York City-based theater company Repertorio Espanol at 7 p.m. Wednesday, April 10, at the Quick Center’s Rigas Theater. Presented in Spanish with English superscript, the presentation is an adaptation of Miguel de Cervantes’ epic novel that follows the misadventures of Don Quijote and his loyal squire, Sancho Panza. The performance is free to the campus community, with a limited number of tickets available to the general public at $5 each.