'One Person Can Make a Difference:'
Kohler Receives Key to City 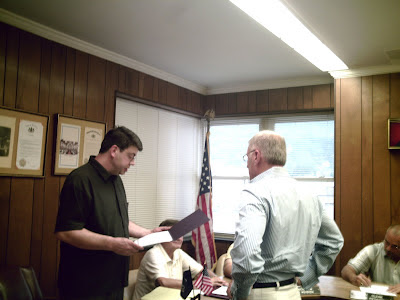 Bradford Mayor Tom Riel reads a proclamation before presenting businessman John Kohler with a key to the city during Tuesday night's council meeting.

One person can make a difference.

That was the title of a PowerPoint presentation highlighting the accomplishments of Bradford businessman John Kohler. The presentation was prior to Tuesday's city council meeting, in which Kohler received a key to the city.

Office of Economic and Community Development Executive Director Sara Andrews said ten years ago no one was investing in Main Street. She said the city was buying buildings with the intention of renovating them to try to encourage other people to do the same.

She said Kohler "really stepped forward with the number of buildings he's now acquired and has renovated. And they're viable buildings. They're not just buildings that were renovated and you hope someone moves in. He actually went out and recruited people to come into those buildings."

One of the examples she pointed out was 45 Main St., which now houses a furniture store and the Emery Espresso Bar.

Andrews said they "fought to save this building," after a fire heavily damaged it.

She said they were "fortunate during this effort that (Kohler) stepped forward and said he wanted to renovate the building."

"That says a lot about John and his efforts to try to save our buildings on Main Street," she said. 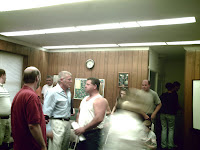 The proclamation read by Mayor Tom Riel says, in part, "the renovations that he has made to various historic buildings in the downtown historic district, as well as renovations to several residential structures have contributed to economic revitalization of the city. Whereas his vision for a better and stronger Bradford, and continuing investments in the community have created new employment and housing opportunities for our citizens, thus helping to provide economic stability."

Also during Tuesday's meeting, council approved a payment of $9,765 to Modeltech for a "Hazard House" for the city fire department.

Fire Chief Boo Coder explained that a hazard house is a cutaway of the inside of a house that's about 4 feet wide and 3 feet tall. It shows people where to put smoke detectors, fire extinguishers and carbon monoxide detectors, and allows firefighters to demonstrate the proper use of the detectors.

Coder said the hazard house can show a fire in the kitchen – even with smoke coming out of a stove – which gives firefighters a tool to show people how to put the fire out, and what happens during a fire.

He said among the places they will take the hazard house are schools and senior centers. He also hopes to give council a demonstration.

Ninety-five percent of the money for the hazard house is grant money from the FEMA Homeland Security Assistance to Firefighters Grant Program.

Also Tuesday, council granted a waiver for alcohol to be served on Festival Way for Festa Italiana on August 14, 15 and 16.
Bradford City Council

Solomon's words for the wise said…
Did you ever have one of those hectic days when you can't even spell your name right?
July 9, 2008 at 7:22 AM