Scarnati: Reflect on Succeses of CBK 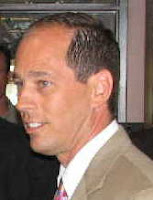 Under the state constitution Scarnati is required to hold both Lieutenant Governor and State Senate positions at the same time.

“While I am proud to serve as the next Lieutenant Governor of the Commonwealth, my emotions are significantly tempered due to the passing of Catherine Baker Knoll,” Scarnati said. “She was a champion for working families and a true leader for Pennsylvania. Her presence and commitment will be sorely missed.”

Scarnati also mentioned that he sees very little conflict in being from a different political party than the Governor. In fact numerous other states currently have Governor and Lt. Governors of differing parties.

“I realize that my role in the executive branch may be diminished, but I believe both Governor Rendell and I can look beyond party affiliation and focus on improving the lives of Pennsylvanians, as we have in the past,” Scarnati added. “In the meantime, I respectfully ask that we all give pause and reflect on the tremendous successes of Catherine Baker Knoll.”

“In closing, it is with great sadness that I ascend to this position under these circumstances, but know that I will carry out the duties and responsibilities of this office with the same honor and dignity that Catherine Baker Knoll displayed,” Scarnati concluded.
CBK Joe Scarnati politics rendell