'Bye Bye Birdie' at the Bromeley 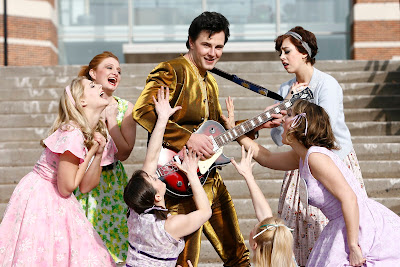 “Bye Bye Birdie,” a Broadway musical comedy based on the early career of Elvis Presley, will be staged Thursday, April 30, at the University of Pittsburgh at Bradford.

The title character is a Presley-esque Conrad Birdie, idol of teens across the country. Conrad, like Presley, is drafted, throwing his agent, Albert Peterson, out of work. Albert and his girlfriend hold a nationwide contest -- a lucky girl will give a good-bye kiss to Conrad on “The Ed Sullivan Show.”

The winner, Kim McAfee, gets a visit from Conrad at her Midwestern home, frustrating her father and making her boyfriend jealous. 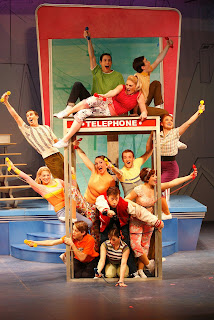 “‘Bye Bye Birdie’ is the historical ancestor to ‘Grease’ and ‘High School Musical,’” said Randy Mayes, director of arts programming at Pitt-Bradford. “Birdie is the teen musical that started the trend, and it’s a lot of fun to see where these modern musicals originated.”

Making its debut on April 14, 1960, “Bye Bye Birdie” had 607 performances on Broadway before being turned into two movies in 1963 and 1995. Dick Van Dyke and Charles Nelson Reilly portrayed roles in the original production.

The lineup of songs include “How Lovely to be a Woman,” “Put on a Happy Face,” “Kids” and the famous scene of “The Telephone Hour.”

The stage production garnered eight Tony Awards, including Best Musical. Life Magazine described the show as “a tuneful teenage rampage... a buttercup-bright musical hit that adds a note of fun to the Broadway season.” 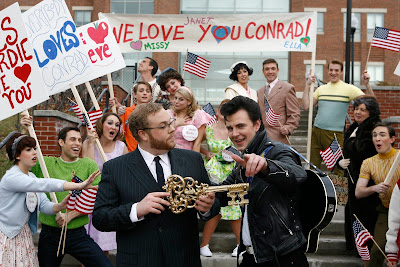 For disability-related needs, contact the Office of Disability Resources and Services at 814-362-7609 or arj4@pitt.edu.

The photos of Woodwind Productions’ ‘Bye-Bye Birdie,’ are ‘Idol’ -- Eli Budwill plays Birdie for a bevy of starstruck teens; ‘Key to Sweet Apple’ -- the mayor, played by Dave Adamick, gives the key to the city to Birdie, played by Eli Budwill; and ‘Telephone Booth’ -- a cast number from the show.
pitt-bradford University of Pittsburgh at Bradford

Anonymous said…
I read a article under the same title some time ago, but this articles quality is much, much better. How you do this?
March 13, 2010 at 6:16 AM