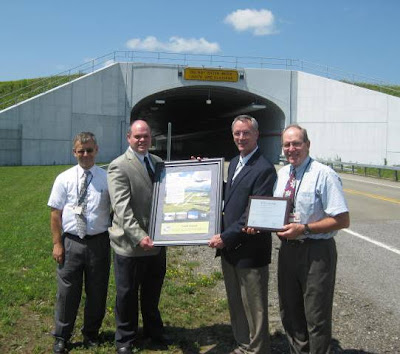 This $15 million project, designed and managed by C&S Companies, improved the runway safety area (RSA) for Runway 7-25 to meet FAA design standards. RSAs are critical safety features of airports that accommodate an accidental overrun, undershoot, or veer-off of an aircraft.

"Improving runway safety at the Chautauqua County Airport is crucial, and C&S Companies has shown again that they were up to the task of designing and managing this effort," Edwards said.

FAA standards require 1,000 feet of length beyond each runway end and 500 feet of width along the entire runway. At Jamestown, both ends of the runway did not meet the minimum standards.

Some of the improvements included:

• Construction of a tunnel for West Oak Hill Road (approximately 525 feet long by 32 feet wide) under the RSA at the southwest end.

• Mitigation of wetlands that were disturbed as a result of the safety area improvements. New wetlands were created at the Conewango Swamp, a site owned by the NYSDEC.

"Working closely with my administration, Director of Public Facilities George Spanos and Airport Manager Dave Sanctuary, C&S secured Federal FAA and New York State DOT funding for the project resulting in the creation of construction jobs throughout the term of the project," Edwards said. "This project will benefit users of the Jamestown airport, as well as those in the surrounding community, with increased safety."

ACEC is the voice of America’s engineering industry. The more than 5,500 firms comprising the council’s membership are engaged in a wide range of engineering works that propel the nation’s economy, and enhance and safeguard America’s quality of life.