August 09, 2013
Recognizing his outstanding record of military service during World War II and his contributions to the liberation of France in 1944-45, United States Army Air Forces Sergeant Herman E. White of Portville has received the honor of appointment to France’s National Order of the Legion of Honor.

At a reception held this afternoon in Bradford, Pennsylvania, Senator Catharine Young (R,C,I - Olean) presented Sergeant White with the official medal conferred upon honorees inducted into the Legion of Honor. 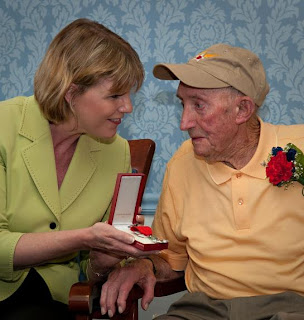 The National Order of the Legion of Honor is the highest decoration in France. Appointment to the Order is awarded by the President of France for excellent civil or military conduct, as confirmed after official investigation by the French government. Not limited to French citizens alone, appointment may also be conferred upon American World War II veterans who fought to liberate France from the occupation of Nazi Germany.

“Herman White put his life on hold and answered the call to serve our country in a truly selfless way. He bravely fought in Africa and Europe to defeat fascism and bring freedom to millions. This prestigious award demonstrates that his contributions to victory in World War II have earned him the gratitude of not just Americans, but of French citizens as well,” said Senator Young.

“I know my dad is very appreciative of this honor, and it means a lot to him. It has been a long time in coming, and he is very proud to have finally received this award,” said Michael White, Herman’s son.

Herman White was born on April 1, 1918, in Ceres, New York, where he grew up and attended school, before moving on to Bolivar in the eighth grade.

While working as a mechanic and driller in the oil fields of Pennsylvania’s Northern Tier, White was drafted into the United States Army on June 1, 1942.

Following induction at Fort Niagara and initial training, Sergeant White was assigned to prepare munitions for arming and loading with the newly formed 444th Bomb Squadron. The 444th, which was equipped with the Martin B-26 Marauder, would be one of the first Army Air Force units to enter combat in Europe.

When Sergeant White joined the 444th, the unit was stationed at MacDill Field, Florida, as part of the Third Air Force. The unit was assembling air and ground crews preparing for wartime service.

Sergeant White deployed with his unit to England on September 27, 1942, and would spend the next 3 years supporting Allied forces in Africa, the Mediterranean, and Europe with the preparation and arming of munitions to be loaded on the Martin B-26. The 444th entered into combat operations with the 320th Bomb Group, 12th Air Force.

With the 444th Bomb Squadron’s deployment to Africa following Operation Torch landings in Algeria, Sergeant White supported the tactical bombing missions against Axis forces in North Africa until the end of the Tunisian Campaign in 1943.

The unit then participated in the invasion of Sicily and Italy, the liberation of Corsica and Sardinia, Operation Dragoon and the invasion of occupied Southern France, and the Allied ground forces’ invasion of Western Germany. After the successful defeat of Nazi Germany, the unit operated out of Bergdorf, Germany, as part of the occupying forces. The 444th Bomb Squadron was inactivated on December 8, 1945 in Germany.

After returning to the United States, Sergeant White was discharged at Fort Dix, New Jersey on September 26, 1945, having served for three years and four months, approximately one year of which was spent in France.

Sergeant White returned to Portville, where he pursued a career as a diesel mechanic and farmer, and he and his wife Rosemary raised their son Michael.

“Sergeant White’s wartime service and the character he has demonstrated throughout his life reveals him to be a man we can all admire and aspire to emulate. This award serves as another indication of our sincere gratitude and appreciation,” said Senator Young.