April 11, 2014
A dump truck and a car collided at the intersection of Minard Run Road and High Street this afternoon, injuring four people. 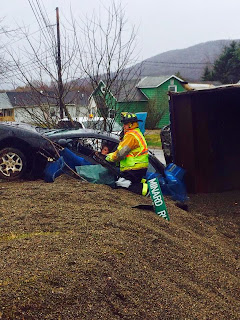 The car driven by 47-year-old Paula Lannager of Shinglehouse was traveling south on High Street, where it stopped at the stop sign and then pulled onto to Minard Run Road, where the truck driven by 42-year-old Jack Kilby of Great Valley, New York, was traveling east.

Bradford Township Police say Kilby tried to avoid the collision, but the truck started to tip over and then landed on the back on the car in the east ditch on High Street.